More patients across South Tyneside and Sunderland are now getting access to high quality stroke care and life saving treatment thanks to major changes made as part of Phase One of the Path to Excellence programme.

Latest data from the Sentinel Stroke National Audit Programme (SSNAP)* shows the quality of stroke services has risen significantly over the past two years with more patients now receiving timely care, delivered by specialists, in a dedicated acute stroke unit.

SSNAP is used to measure the quality of stroke services across the NHS.  It uses a number of key measures which are known to prevent serious, long-term disabilities and give patients the very best chance of surviving a stroke and returning to as normal a life as possible following a stroke.

Since changes were made in December 2016** to centralise all acute inpatient stroke care at Sunderland Royal Hospital, there have been major improvements in clinical outcomes for patients, in particular for South Tyneside residents:

By concentrating teams of stroke consultants and therapy specialists into one dedicated acute stroke unit, there have also been many positive benefits for Sunderland patients who are now also receiving more timely care: 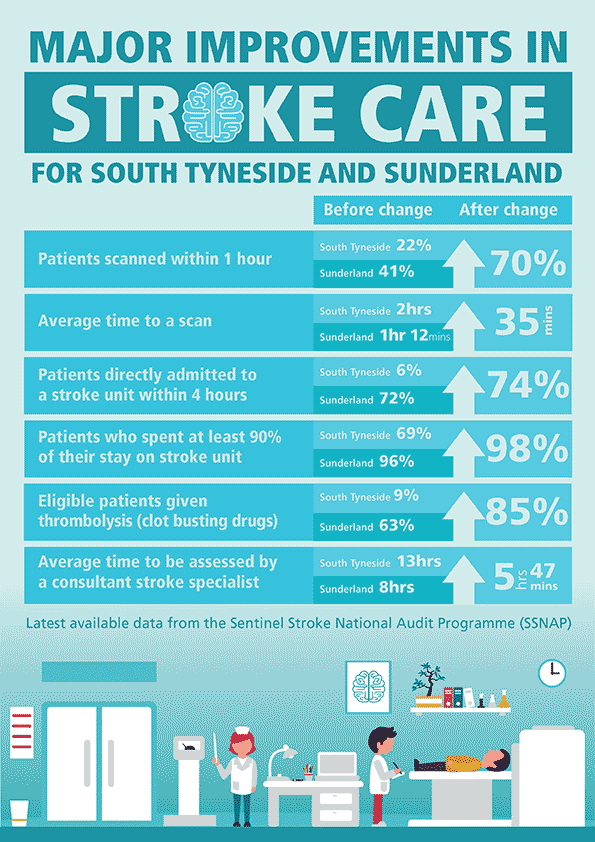 Consultant Stroke Physician Dr Jon Scott has helped deliver the new service across South Tyneside and Sunderland.  He said: “By consolidating stroke services, we have been able to improve dramatically against national standards and best practice recommendations and this has undoubtedly saved and improved lives. When we talk about ‘clinical excellence’ this is exactly what we mean.

“Patients from both South Tyneside and Sunderland now have access to seven-day specialist stroke services and, as a result, are being seen far quicker by medical and nursing staff which means they can start their rehabilitation sooner. The whole team have done a fantastic job of improving the service we offer and we will continue to build on this to ensure we provide our local populations with stroke care of the highest quality.”

Dr Matthew Walmsley, local GP and Chair of South Tyneside Clinical Commissioning Group (CCG) said:  “These results are really fantastic to see and very clearly demonstrate the vast improvements in clinical care for our patients in South Tyneside.  This could not have happened without making the difficult changes to our acute stroke services to bring our two teams together and strengthen the pool of stroke experts we now have readily available to care for our patients 24/7.”

Dr Ian Pattison, local GP and chair of NHS Sunderland CCG said:  “These improvements in stroke services speak for themselves.  By bringing our services together, patients in both localities are now getting quicker access to life saving treatment and that is testament to the hard work and vision of our stroke teams to improve care for patients.

“Our aim throughout the Path to Excellence programme is to make sure we deliver the very best possible care and clinical outcomes for our patients and this means we must continue to evaluate and, where necessary, adapt our services so that we create future services which are amongst the very best in the NHS.”

Claire Challoner credits the new service which is now in place across South Tyneside and Sunderland with saving her life after she suffered a stroke in May 2018.

“It was the most terrifying experience of my life but from the moment I arrived at Sunderland Royal Hospital I felt I was in safe hands and I knew that they would look after me,” she says. “I am so thankful that I had such a fantastic team who gave me the treatment I needed so quickly.”

Nine months after the stroke, life for Miss Challoner, 39, of South Shields, has now largely returned to normal and she’s back at work.  She recalls how she was shopping at the Sainsbury store at The Nook in South Shields after finishing work for the day when she became unwell.

“I had felt as if something was not quite right all week but, generally, I was fine. I was just coming out of the store when everything started spinning. I realised when I tried to look round that nobody was looking and I had to shout out for help.

“The supermarket staff were amazing and knew exactly what to do. Next thing I knew, someone was trying to stop me from falling and someone put me on a seat. I was drifting in and out of consciousness and, within a matter of minutes, my throat was closed and I couldn’t speak, one eye was closed, and the right side of my body was paralysed. I really thought I was going to die. An ambulance was called – I heard later that it arrived in seven minutes – and I was taken straight to Sunderland Royal.

“They got me there very quickly and five or six people were waiting for me on arrival. They immediately got to work inserting cannulas (a needle inserted into the vein) and arranging scans. They were so thorough and they were all absolutely amazing – constantly reassuring me, saying I was going to be alright and doing everything they could to calm me.

“When they had the results of the CT scans, they confirmed that I had a dissected artery in the front of my brain and a clot close to the brain stem and they decided to go ahead with thrombolysis (clot-busting drugs). It was done through my arm and was incredibly painful but the specialist stroke nurse sat and rubbed my arm and talked to me, reassuring and calming me.

“I was taken to the stroke ward and another group of nurses was waiting there to settle me in. I was on observations every 15 minutes for the first 24 hours. A male nurse who was the kindest man did most of my ‘obs’ during that first night. I just remember his voice telling me I was going to be alright and it was all going to be fine.

“After the first 24 hours, I could talk a little bit and move my right arm and right leg again. It was a wonderful feeling because I knew I had had a stroke and at one point I thought I could be paralysed or even die.

“The attention to detail from everyone – consultants, nurses and healthcare assistants – was fantastic. Everything was checklisted and they didn’t miss a trick.  They all shared information so I never had to tell my story twice because they all knew everything they needed to know, whether it was what I’d had to eat and drink or my medication. While the domestic staff were doing their work they would take the time to chat – it was all so friendly. I saw a physiotherapist every day and an occupational therapist two or three times during my hospital stay.

“After five days in hospital I was discharged home but before I left they had a plan in place for me and the specialist stroke nurse took me through everything that was going to happen. They’d organised a referral to the community stroke team, who have been invaluable. I was still very weak and dizzy and had issues with my speech but I started getting phone calls at home the very next day in relation to physiotherapy, speech and language therapy and occupational therapy.”

She says she will always be ‘massively grateful’ for the care she has received, particularly in the crucial hours after the stroke.

“They have this amazing organised structure for every single thing they do and you can tell that they love their jobs. I was very lucky that I had them looking after me and the million little personal touches made all the difference to what was a traumatic experience.”

*The Sentinel Stroke National Audit Programme (SSNAP) measures the quality of stroke care in the NHS and is the single source of stroke data in England, Wales, and Northern Ireland.  The table below shows the improvements in stroke care using the latest available data prior to and after the change in December 2016:
[table id=1 /]

** In December 2016 all acute inpatient stroke care was temporarily centralised at Sunderland Royal Hospital due to service vulnerability and a severe shortage of specialist stroke staff at South Tyneside District Hospital.   NHS South Tyneside and NHS Sunderland CCGs agreed in February 2018 that the change should be made permanent as part of phase one of the Path to Excellence programme.

(July to September 2015 for South Tyneside)

(August to November 2016 for Sunderland)

(October to December 2018 for South Tyneside and Sunderland)